Damien Adam Gray has been jailed for the attack (Picture: Daily Post Wales)The manager of a Spar convenience store was attacked with a brick by a man angry that he could not buy alcohol.

Damien Adam Gray has been jailed for the attack (Picture: Daily Post Wales)

The manager of a Spar convenience store was attacked with a brick by a man angry that he could not buy alcohol.

Damien Adam Gray, 34, had previously been barred from the shop in Anglesey but went back in anyway.

When the manager recognised him trying to buy Strongbow, he gave back his money and escorted him outside.

However, Gray said the incident made him feel ‘intimidated ’ and he returned to the shop armed with a brick.

He launched what police called an ‘appallingly violent attack ’ on Ricky Jones, trying to hit him with the weapon and leaving him with scratches and cuts on his head.

Gray had pleaded guilty to common assault and possessing of an offensive weapon in a public place and appeared at Caernarfon Crown Court yesterday to be sentenced.

Gray coming into the shop with a brick (Credits: Daily Post Wales)

A judge jailed him for ten months for possessing the offensive weapon and two months for common assault to run concurrently.

Prosecutor Jemma Gordon told the court Gray went into the shop in Llangefni on December 2, 2020 at 11.45am.

Ms Gordon said: ‘As he was being escorted out, the defendant grabbed Mr Jones by the neck and grabbed hold of his scarf ’ and called the manager ‘an alien ’.

But the prosecutor said Gray then returned to the store with a brick and was ‘muttering to himself. ’

In a victim impact statement, Mr Jones said he had worked for Spar for 12
years, nine at their Llangefni store.

She said he wrote that ‘the last thing he expected was to be attacked by a
customer ’ and was ‘horrified ’ at the incident.

He went to hospital to be checked for a possible concussion and suffered
from a headache and sensitivity to light the following day.

Mr Jones said he was grateful that the police had arrived but feels nervous
about going back to work.

He has since received counselling and has ‘thought very seriously about his life and reassessed his decisions. ’

Brian Treadwell, defending, said Gray had been drinking but felt the manager ’s actions in escorting him out of the shop had been ‘over the top ’.

He claimed the defendant ‘did not appear to be representing a threat ’ yet
the manager ‘pushed him around outside the store ’.

Gray, of Llangefni, nevertheless accepts he should not have returned with the brick.

During the assault, the defence alleged that Gray had ‘pulled out at the
key moment ’.

Mr Treadwell said the defendant had worked as a fibre glass manufacturer
and repaired kayaks.

But both his parents had abused alcohol and he took time off work to look
after them.

The court heard Gray had also been suffering with psychosis and ‘hears
voices ’.

Jailing Gray, the judge Her Honour Nicola Jones also imposed a two-year
restraining order banning the defendant from entering the Spar in Llangefni
or contacting Ricky Jones directly or indirectly.

Gray was also jailed for one month and two weeks, for breaching a suspended sentence, from an earlier offence, to run consecutively to the ten months term. 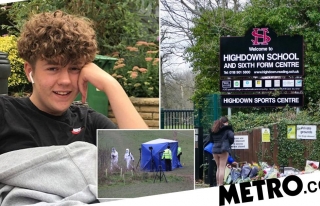