QAnon 'shaman' among mob who stormed US Capitol building

The heavily-tattooed Trump supporter dubbed the QAnon Shaman has been identified as Jake Angeli
(Picture: Getty)

Some of the pro-Trump mob who stormed the US Capitol building have now been identified.

One heavily-tattooed supporter who wore horns, a fur hat and face is believed to be a QAnon conspiracy ‘influencer ’ known as the ‘Q Shaman ’.

Jake Angeli, 32, used to promote himself as a singer and actor but has become a figure at right-wing rallies while dressed in his eccentric outfit.

Another rioter who stormed House Speaker Nancy Pelosi ’s office and put his feet on her desk is now known to be Richard ‘Bigo ’ Barnett, a 60-year-old man from Arkansas.

Jake Angeli yells inside the Senate Chamber as a pro-Trump mob stormed the US Capitol building (Picture: Win McNamee/Getty Images)

Jake Angeli seen speaking at a rally in Phoenix. He has become a prominent figure among Qanon conspiracy theorists (Picture: AP)

A Trump supporter who sat inside US Speaker Nancy Pelosi ’s office has been revealed as Richard ‘Bigo ’ Barnett (Picture: AFP/Getty)

A looter who made off with a lectern has been named as psychology graduate Adam Johnson from Florida
(Picture: Win McNamee/Getty)

Following the siege, he boasted that he ‘wrote [Pelosi] a nasty note, put my feet up on her desk and scratched my balls. ’

He also describes himself as a white nationalist online and claims he will run for Arkansas governor in 2022.

A looter who waved and smiled at photographers as he made off with a lectern has revealed to be a psychology graduate from Bradenton, Florida.

Mrs Babbit was among those who tried to break through a barricaded door in the Capitol (Picture: Twitter)

Adam Johnson ’s photos on his now-deleted social media accounts show him posing by a ‘closed to all tours ’ sign inside the Capitol building.

Four people have been confirmed dead following the riots, including a female protester who was shot dead by police.

She died of a bullet wound during the violent storming in a bid to interrupt the formal approval of Joe Biden ’s presidential election win.

Two men and a woman also died in the area around the Capitol, but police did not directly link their deaths to the violence.

Washington police chief Robert Contee told reporters: ‘Each of the three appeared to have suffered medical emergencies which resulted in their deaths. ’

Mrs Babbit was shot by officers as the mob tried to break through a barricaded door in the Capitol where police were armed on the other side. She was hospitalised and later died.

A large group of Donald Trump supporters have stormed the US Capitol building to try and stop Joe Biden being certified as the next president.

Here are some of the main updates from the evening of January 6: 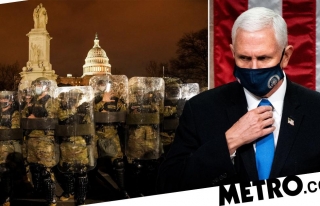 Order to send in National Guard to riots 'came from...