Police stop drivers and ask 'why are you here?' during crackdown on travel

Officers ‘got a bit keen ’ and started handing out this leaflet in Maidenhead (Picture: Getty/Hyde News and Pictures)

A police force has apologised after its officers got a ‘bit keen ’ and started handing out leaflets asking drivers ‘why are you here? ’ as part of a crackdown on travel during lockdown.

Residents of upmarket Maidenhead, Berkshire, were outraged to find their trips for shopping and exercise challenged by uniformed police, who stopped all traffic on a bridge and distributed the leaflets to passing cars.

It read: ‘Government restrictions require us to avoid ALL UNNECESSARY TRAVEL. You should exercise no more than once daily. This should be by walking, running or cycling etc. from your home address.

‘You should not be driving to a location away from your home to carry this out. Please refrain from unnecessary travel until the restrictions have been lifted. ’

However, bosses at Thames Valley Police have said drivers should not have been challenged and have apologised for the actions of the officers.

Residents criticised the heavy-handed approach to policing the latest restrictions. Rosalind Bieber, who shared a picture of one of the leaflets online, said: ‘I got caught up in a big queue this morning at 9.30am, from the roundabout by the police station to the Berkeley ’s site.

‘There were two police officers stopping every single car and asking where we were going. I was handed this leaflet as shown below and told I cannot shop at the Tesco in Taplow as I live in Maidenhead. They will be issuing fines from tomorrow, so be aware folks. ’

Ms Bieber added: ‘If Tesco is where I do my regular food shop why should I then be told to shop at another supermarket.

‘I ’m travelling two miles from an SL6 postcode to another SL6 postcode. I dislike Sainsbury ’s so I won ’t be going there. Not my fault that Tesco is two miles away, the one in Maidenhead closed down three months ago! Instead the police should be cracking down on those travelling on non essential journeys! ’

The leaflet that was handed out to passing cars (Picture: Hyde News & Pictures Ltd)

Another resident said she was concerned that key workers and hospital patients may have been caught up in the queues caused by the road block. Others said elderly relatives had been left ‘shaken up ’ by being forced to explain themselves.

Some local essential businesses said they had lost money because clients were stopped and turned away.

Local councillor David Cannon raised the issue with Thames Valley Police to find out why the stops were being carried out and said he had received a statement from Inspector Tracey Croucher, who explained it was an ‘individual officer who was just a bit keen. ’

Inspector Croucher ’s statement said: ‘We are aware of leaflets handed out and that drivers have been stopped and challenged. This was not Windsor and Maidenhead officers but TVP officers and therefore TVP apologise for any upset caused.

A file picture of police officers stopping motorists in cars to check that their travel is ‘essential ’ (Picture: Getty)

‘This was an individual officer who was just a bit keen, this has been addressed and should not happen again. However if it does please let TVP know as soon as possible.

‘TVP will continue with our consistent approach of engaging, explaining, encouraging and will enforce where there is a blatant breach of legislation.

‘We recognise the importance of working with our communities in all areas of policing and we particularly value your continued support during this latest (and hopefully final) lockdown. ’

Yanıt : @name
1 MP claims she was told to quit leadership roles after... 2 Donald Trump's house of cards collapses as aides quit... 3 QAnon 'shaman' among mob who stormed US Capitol building 4 Order to send in National Guard to riots 'came from... 5 Spar manager was attacked with a brick after refusing... 6 Girl, 13, and two boys charged after autistic teenager... 7 Single-dose Covid vaccine could be approved for UK... 8 Reformed crack dealer warns lockdown puts young people... 9 Lost postcard finally delivered to retired man after... 10 Dad who lived in shed to protect daughter moves into... 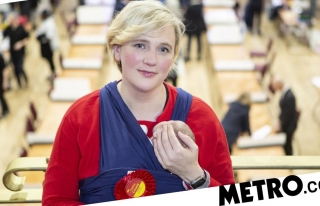 MP claims she was told to quit leadership roles after...