DC Metro police made 68 arrests during last night ’s Capitol riots (Picture: Los Angeles Times)Police have arrested 68 people following last night ’s riots at the US Capitol building. Only one of those arrested is local to Washington, according to DC Metro Police, indicating that many people tra.

Only one of those arrested is local to Washington, according to DC Metro Police, indicating that many people traveled from across the US to be a part of the protests.

The arrests were made as hundreds of pro-Trump rioters marched on the Capitol building yesterday in protest to Joe Biden ’s landslide election victory.

Police at the US Capitol were faced with a wall of rioters yesterday (Picture: Rex)

At least 68 arrests have been made so far (Picture: Los Angeles Times/REX)

Meanwhile, DC ’s acting police chief has said that 56 police officers were injured during the protests and one officer is still in hospital.

Four people lost their lives as crowds breached security to gain access inside the Capitol Rotunda, and the FBI has asked members of the public to help identify people who were involved in ‘inciting violence ’ during the riots.

It comes as the secretary of the US Army has today announced plans to build a seven foot non-scalable wall around the Capitol to protect it from further threat.

Capitol Police stand detain protesters outside of the House Chamber inside the Capitol building (Picture: Getty)

World leaders and many US politicians, including Republicans, have condemned the actions of the rioters last night in what New Jersey governor Phil Murphy described as ‘one of the darkest days in our nation ’s history ’.

Washington ’s mayor, Muriel Bowser, said ‘what happened yesterday was textbook terrorism ’ and has described the events as a ‘failure ’ in terms of security. 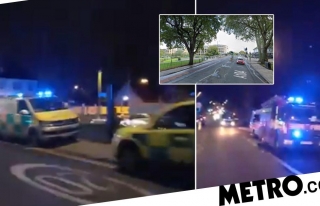 Body found after man 'fell from boat' into...