Mike Pence is said to have called in the National Guard after Trump resisted (Picture: AP/Getty)The order to deploy the National Guard to a violent mob who stormed the US Capitol on Wednesday reportedly came from Vice President Mike Pence, not Donald Trump. Four people have been confirmed dead follo.

Mike Pence is said to have called in the National Guard after Trump resisted (Picture: AP/Getty)

The order to deploy the National Guard to a violent mob who stormed the US Capitol on Wednesday reportedly came from Vice President Mike Pence, not Donald Trump.

Four people have been confirmed dead following the riots aimed at overturning the election result, including a woman who was fatally shot by police.

Ashli Babbit, a fervent Donald Trump supporter and 14-year Air Force veteran, died of a bullet wound to the chest as thousands broke into the building in Washington DC last night causing a lockdown.

The siege was eventually brought under control after the army activated over 1,000 troops of the National Guard.

Trump is said to have initially resisted the move, despite Capitol police being overwhelmed as the outgoing president ’s supporters breached security barriers and defaced the building while lawmakers hid under desks donning gas masks.

According to US media, Mr Pence approved the order to deploy the Guard, acting in conjunction with Pat Cipollone, the White House counsel.

The DC National Guard were deployed to the Capitol after it was besieged by Trump supporters (Picture: AP)

Sources told CNN that the vice president played a key role in coordinating with the Pentagon about deploying the extra forces and urged them to move faster after Trump rebuffed the idea.

Public statements by acting Defense Secretary Christopher Miller and other top officials also suggest it was Pence who ultimately approved the decision, despite Trump being the Commander in Chief.

Mr Miller said he and the chairman of the Joint Chiefs of Staff, Gen. Mark Milley, spoke with Pence, not Trump, on Wednesday afternoon. He said he was also in contact with top congressional lawmakers.

‘Chairman Milley and I just spoke separately with the Vice President and with Speaker Pelosi, Leader McConnell, Senator Schumer and Representative Hoyer about the situation at the U.S. Capitol, ’ he said in a statement.

‘We have fully activated the D.C. National Guard to assist federal and local law enforcement as they work to peacefully address the situation. ’

I just spoke with Vice President Pence. He is a genuinely fine and decent man. He exhibited courage today as he did at the Capitol on 9/11 as a Congressman. I am proud to serve with him.

The comments, which were not otherwise explained, came as Trump refused to condemn the violence and repeated unsubstantiated claims about electoral fraud.

‘It was in regards to getting the National Guard there. He said he will call right now. ’

The comments appear to dispute what White House press secretary Kayleigh McEnany said in a tweet on Wednesday, when she asserted that Trump ‘directed ’ the National Guard to respond to the situation.

It also raises questions about who was acting as commander in chief in what has been branded one of the darkest days for American democracy.

The National Guard was not fully activated until hours after the rioters descended on the capitol.

The mob broke into the building during proceedings to certify Joe Biden ’s victory, which the vice president was overseeing.

Pence had to be evacuated amid the violent clashes, while Trump spent much of the afternoon in his private dining room of the Oval Office watching the scenes unfold on television.

Trump spent the lead-up to the proceedings publicly hectoring Pence, who had a largely ceremonial role, to aid the effort to throw out the results.

He tweeted: ‘Do it Mike, this is a time for extreme courage! ’

But Pence, in a statement shortly before presiding, defied Trump, saying he could not claim ‘unilateral authority ’ to reject the electoral votes that make Biden president.

Before dawn on Thursday, lawmakers finished their work, confirming Biden won the election.

Trump has since committed to an orderly transition of power but faces being impeached before then.

The president gave his supporters a boost into action Wednesday morning at a rally outside the White House, where he urged them to march to the Capitol.

He has been accused of inciting the rampage, which began shortly after he repeated unfounded claims of election fraud to the thousands of rallying demonstrators he had invited to Washington.

As the world watched on in shock, Trump sent a self-pitying video message urging ‘very special ’ protesters who besieged the US Capitol to ‘go home ’ and adding: ‘We love you. ’

In the aftermath of the siege, several Republicans announced they would drop their objections to the election, including Sen. Kelly Loeffler, R-Ga., who lost her bid for reelection Tuesday. 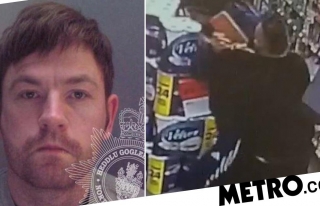 Spar manager was attacked with a brick after refusing...