Chris Harmon should have received the postcard in 1955 (Picture: Chris Harmon/BNPS)A retired salesman has declared himself ‘elated ’ after a long-lost postcard from 1955 was unexpectedly delivered to him.  Chris Harmon, 75, was sent the letter by an American pen pal when he was a young boy livi.

Chris Harmon should have received the postcard in 1955 (Picture: Chris Harmon/BNPS)

A retired salesman has declared himself ‘elated ’ after a long-lost postcard from 1955 was unexpectedly delivered to him.

Chris Harmon, 75, was sent the letter by an American pen pal when he was a young boy living in East Sussex – but it took 66 years to finally reach him.

The correspondence was recently discovered at a charity shop in Dorchester, Dorset, after being handed in as part of Weldmar Hospicecare ’s stamp collection fundraising appeal. A diligent volunteer saw the postcard was addressed to a ‘Chris Harmon ’ and searched for him on Facebook.

He messaged Mr Harmon, from Pershore, Worcestershire, on the off-chance the document was meant for him and the pair were delighted to realise it was.

Mr Harmon, who spent his childhood in Peacehaven, was thrilled to at last receive the October 13 reply from Mr Kendall, who signs off as ‘Uncle Fred ’ despite not being related and promises a 10th birthday present.

The pair remained pen pals across the Atlantic until the 1970s, when they lost contact.

Mr Harmon had tried unsuccessfully to track down New Jersey ’s Mr Kendall – who a publisher from Short Hills – on a visit to the US in 2007, but has since discovered that his friend had died a number of years ago.

Mr Hamon, 75, said he was ‘elated ’ to receive the letter (Picture: Chris Harmon/BNPS)

He thanked the hospice, which provides end of life care in Dorset, for finding him and passing on the postcard.

The retired salesman explained: ‘I was absolutely elated when I got the message telling me about the postcard – I could not believe what I was reading, it was just so out of the blue.

‘The card was addressed to Barclays Bank House in Peacehaven, Sussex, which is where I lived as a child.

‘I have no idea how it ended up in a hospice charity in Dorset and I would love to find out more about it. It really is quite bizarre.

‘I am very grateful to the team at Weldmar for tracking me down and sending me the postcard. ’

Yanıt : @name
1 Dad who lived in shed to protect daughter moves into... 2 New 'life-saving' Covid treatment can reduce risk... 3 UK sees another day with more than 1,000 deaths but... 4 Surgery visited by Hancock to promote Oxford vaccine... 5 Nurse force-fed dementia patients and wanted one to... 6 Elon Musk now officially the richest person in the... 7 France extends UK border closure until further notice 8 Covid patients in hospital 50% more than during virus... 9 Every elderly care home resident to be offered vaccine... 10 Impeachment articles drawn up against Donald Trump... 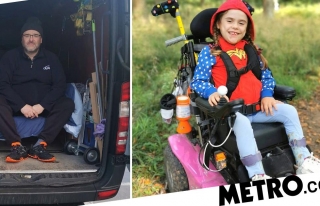 Dad who lived in shed to protect daughter moves into...