Check-in at the Port of Dover in Kent on the first fully operational day under post-Brexit regulations (Picture: PA)

France has extended its closure of the UK border until further notice as coronavirus infections continue to rise.

The border was initially closed last month, causing widespread traffic chaos for lorry drivers in Dover with less than two weeks until the end of the Brexit transition period.

France joined a number of other countries to place a temporary travel ban after the discovery of a mutant strain of Covid-19 believed to be 50% to 70% more infectious.

The French border was reopened on December 22 in response to European truck drivers being stuck overnight in miles of traffic.

However people are only allowed to come to France from the UK if they produced a negative Covid-19 test beforehand.

They must also be essential workers, live in France or have French or EU citizenship, meaning the majority of Brits still can ’t visit.

In a statement today France ’s minister for European affairs Clément Beaune said: ‘We decided on December 20 to close the borders with the United Kingdom and this measure will be extended until further notice. ’

At a press conference today French Prime Minister Jean Castex said the country ‘cannot lower its guard ’ as he announced prolonged closures of bars, restaurants and cultural centres until at least February.

France will remain under an 8pm to 6am curfew, with some places limited to 6pm to 6am.

Castex said: ‘The time has not come to return to normal . . . We still admit one person to the hospital every seven minutes. and one in two people in intensive care are there for Covid-19. ’ 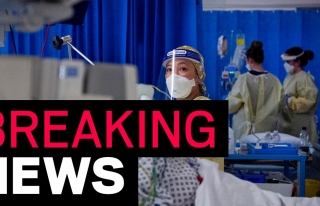 Covid patients in hospital 50% more than during virus...