The group, who don ’t live in the same household, were stopped by the police (Picture: Northamptonshire Police / SWNS)

Four people were each fined £200 after they were caught breaching coronavirus laws by driving ‘to get a McDonald ’s breakfast ’ in Northampton.

The group, made up of two men and two women, were travelling together in the same car, despite not being part of the same household. They were stopped by police on Bedford Road at 5am on Wednesday morning – two hours before the nearest Mcdonald ’s opened.

Under current restrictions, people are not allowed to leave their homes unless they have a valid reason, such as travelling to a job as a key worker, fulfilling care responsibilities, exercising or shopping for food and medical supplies.

The law also states that people can only meet up with one other person outside their household at a time, in a public outdoor space.

A spokesperson for Northampton Response Team said of the incident: ‘At 5am we stopped a car with four people in… Just going to McDonald ’s.

‘Not all of them live in the same household. Four COVID tickets issued. Please make sure you are up to date with the most recent government guidance to make sure you don ’t end up with a ticket! ’

McDonald ’s in the area open at 7am (Picture: Getty Images)

A Northamptonshire Police spokesman added: ‘The Government has been very clear about the necessity for everyone to stick to the rules about when you can go out and what you can do.

Trump's America: How it began and how it ended summed up in two pictures

‘The vast majority of people across Northamptonshire continue to act responsibly however, a small minority continue to spoil it for everyone else.

‘If you are the kind of person who decides to put others at risk with irresponsible behaviour, you can expect us to take the appropriate action. We need everyone to play their part and protect the NHS – this is more important now than ever before, due to the alarming rise in infections. ’

Yanıt : @name
1 Boris to address nation at 5pm 'to unveil Army-led... 2 Police stop drivers and ask 'why are you here?' during... 3 MP claims she was told to quit leadership roles after... 4 Donald Trump's house of cards collapses as aides quit... 5 QAnon 'shaman' among mob who stormed US Capitol building 6 Order to send in National Guard to riots 'came from... 7 Spar manager was attacked with a brick after refusing... 8 Girl, 13, and two boys charged after autistic teenager... 9 Single-dose Covid vaccine could be approved for UK... 10 Reformed crack dealer warns lockdown puts young people... 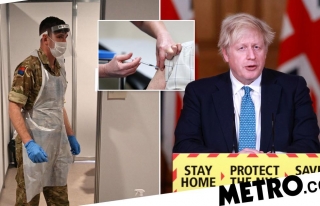 Boris to address nation at 5pm 'to unveil Army-led...