Four White House aides, including Matt Pottinger, pictured above, have made their exits public so far with more expected to come (Picture: AFP / Getty Images / PA)

A number of White House aides have now quit in the wake of riots in the US Capitol.

Deputy national security advisor Matt Pottinger is the latest to step down from his role as a string of further resignations are expected.

Bloomberg was first to report that Pottinger, who was a leading figure in the development of the president ’s China policy, handed in his resignation in disapproval of Trump ’s involvement in inciting violence and unrest in Washington DC.

Sources said he had initially been planning to stand down on election day, but the events of yesterday were thought to have been the final straw.

He is the fourth aide to make his exit public as a flurry of staff appearing to be heading towards the doors of the White House following the terrifying events.

The chief of staff and press secretary for first lady Melania Trump, Stephanie Grisham, was the first to announce her resignation.

‘It has been an honor to serve the country in the White House. I am very proud to have been a part of Mrs Trump ’s mission to help children everywhere, and proud of the many accomplishments of this administration, ’ she said in a statement.

Deputy national security advisor Matt Pottinger is the latest to step down from his role (Picture: Getty Images)

It has been an honor to serve the country in the @WhiteHouse . I am very proud to have been a part of @FLOTUS @MELANIATRUMP mission to help children everywhere, & proud of the many accomplishments of this Administration. Signing off now – you can find me at @OMGrisham â¤ï¸ðºð¸

Grisham was one of Trump ’s longest-serving aides, having joined the campaign in 2015.

She was also the White House press secretary for a year but never gave a press conference.

‘As someone who worked in the halls of Congress I was deeply disturbed by what I saw today, ’ Matthews wrote in a statement.

‘I ’ll be stepping down from my role, effective immediately. Our nation needs a peaceful transfer of power. ’

The mass exodus from the Trump administration comes after four died amid violence in the US Capital last night (Picture: REX)

White House social secretary Rickie Niceta, who also works in the East Wing with the first lady, is also understood to have submitted her resignation.

US news sources claim more aides, including national security adviser Robert O ’Brien, are on the brink of leaving following the violence.

And sources claim there was also talk inside the White House that deputy chief of staff Chris Liddell might also leave.

It comes after two anonymous sources said the aides were torn between fears of what more would happen if they left, and a desire to register their disgust with their boss.

The mass exodus from the Trump administration comes after four died during riots in the US Capital last night.

Trump supporter and air force veteran Ashli Babbit died of a bullet to the chest amid the chaotic scenes.

She was shot by officers as the mob tried to break through a barricaded door in the Capitol where police were armed on the other side. She was hospitalised and later died.

Despite delays to the process as a result of the riots the US Congress has just formally approved Joe Biden ’s presidential election win, paving the way for him to be sworn in on January 20.

Trump said there would be an ‘orderly transition of power ’ when Biden takes over as president – although he refused to accept he had lost.

Yanıt : @name
1 QAnon 'shaman' among mob who stormed US Capitol building 2 Order to send in National Guard to riots 'came from... 3 Spar manager was attacked with a brick after refusing... 4 Girl, 13, and two boys charged after autistic teenager... 5 Single-dose Covid vaccine could be approved for UK... 6 Reformed crack dealer warns lockdown puts young people... 7 Lost postcard finally delivered to retired man after... 8 Dad who lived in shed to protect daughter moves into... 9 New 'life-saving' Covid treatment can reduce risk... 10 UK sees another day with more than 1,000 deaths but... 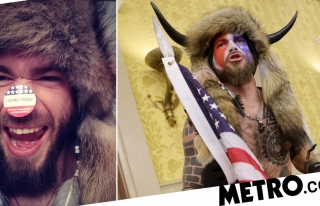 QAnon 'shaman' among mob who stormed US Capitol building