A dad who moved into his shed to protect his vulnerable ‘superhero ’ daughter from Covid-19 during the first lockdown has now decided to live in his van to see out the latest restrictions.

Carmela ‘Wonder Girl ’ Chillery-Watson, six, who suffers from muscular dystrophy, has been praised by Wonder Woman star Gal Gadot for her bravery and fund-raising activities.

Dad Darren lived in the shed at the bottom of his garden in Market Lavington near Devizes, Wiltshire, when the virus first hit to protect her.

Darren was allowed back into the house when restrictions were relaxed but has now moved out again into his van.

Delivery driver Darren, who works 12 to 16 hour days, told BBC Radio Wiltshire he is ‘absolutely fine ’ sleeping in the back of the vehicle.

‘I have my sleeping bag and duvet and that ’s where I stay. It ’s quite cosy – it ’s only when I have to get out of bed it ’s a struggle. It gets quite cold! ’

The local community has rallied round Carmela and her family during the pandemic, delivering food and medicine.

Darren Chillery-Watson in the van he has been living in (Picture: SWNS)

She also hit the headlines earlier in the year after raising thousands of pounds for charity – and was praised by Hollywood A-lister Gal.

Carmela walked the equivalent distance from her home to Ravello, Italy – the filming location of the new Wonder Woman film.

Her 2,000km journey caught the attention of Gal Gadot, who plays the titular heroine in the recent DC Comics film.

The actor called Carmela a ‘real Wonder Girl ’ and donated to the charity total, which topped £12,000.

Muscular dystrophy, a genetic condition, causes the muscles to weaken, leading to an increased level of disability over time – making walking and other activities difficult. 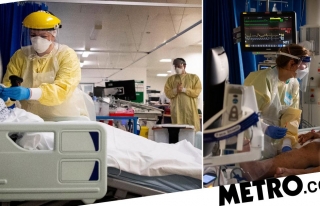