Covid cases increase by a quarter in highest ever weekly total

The latest test and trace stats show a jump in cases by 24% in one week (Pictures: Getty)

Weekly coronavirus cases jumped by a quarter in the last week of 2020, according to the latest test and trace figures.

A total of 311,372 people tested positive for Covid-19 in England at least once in the week to December 30.

This is up 24% on the previous week and is the highest weekly total since Test and Trace began in May.

It ’s the latest sign that infections are sky-rocketing across the country, caused in part by the rapid spread of the new mutant form of the virus.

Government figures show more than 80,000 people tested positive on December 29 alone while the country has recorded more than 50,000 new daily cases for nine days in a row.

Of the 269,886 people transferred to the Test and Trace system in the week to December 30, 84.9% were reached and asked to provide details of recent close contacts.

This is down from 86.4% in the previous week and is the lowest percentage since the week to October 28.

Some 13.9% of people transferred to Test and Trace in the week to December 30 were not reached while a further 1.3% did not provide any communication details.

The figures also show just 33% of people who were tested for Covid-19 in England in the week ending December 30 at a regional site, local site or mobile testing unit – a so-called ‘in-person ’ test – received their result within 24 hours.

Prime Minister Boris Johnson had pledged that, by the end of June 2020, the results of all in-person tests would be back within 24 hours.

He told the House of Commons on June 3 that he would get ‘all tests turned around within 24 hours by the end of June, except for difficulties with postal tests or insuperable problems like that ’.

Yanıt : @name
1 London needs 2,000 more beds to deal with Covid surge... 2 Urgent search for man who 'fell from boat into freezing... 3 Covid denier admits he was wrong after being hospitalised... 4 Four fined £800 for breaking Covid rules on 'drive... 5 Boris to address nation at 5pm 'to unveil Army-led... 6 Police stop drivers and ask 'why are you here?' during... 7 MP claims she was told to quit leadership roles after... 8 Donald Trump's house of cards collapses as aides quit... 9 QAnon 'shaman' among mob who stormed US Capitol building 10 Order to send in National Guard to riots 'came from... 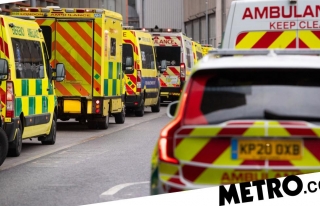